This is an area to discuss topics related to gaming.
Post Reply
313 posts

That is quite a weight difference, EH has a very solid heft to it though.

Still looking forward to receiving our HH even if not where we are going to store it!
Mythrassian Lagomorph Hivemind Minion of the Flaming Bunny Clan
Top

Grumpy Gnome wrote: ↑Wed May 05, 2021 3:28 am Nice table Zenako. I really love the caravan and need to make something like that.

HH does seem to work best as part of a big build.

Mrs. GG was playing around with a table build last night using our desert mat, I will put the photos from that on my next blog entry.

The outdoor dining area is what I think we will have to do for the tavern. I was thinking of what Sorn did and I see you have it here.

I am still trying to convince Mrs. GG to get that Wizkids jungle set. Seems to me that you can never have enough LED fires. I just wish you could buy more of the jungle huts without having to buy the whole set.

That outdoor area was me using some other city plaza tiles I had some another KS a while back that I thought might blend better with the HH buildings than the DF street tiles and plain brick or large cobblestones. I had some of the recent WizKids marketplace stuff and other scatter in another box near that so I decided to add those to the build just to add more scale to the picture and to make a nicer location.

As for the Jungle Set from Wizkids, I could have added that to the area near the more primitive HH buildings but did not bother as space was getting tighter on the mat at that point. I could clearly see doing that in a setting without the other biome styles at the same time.

I could have made a much longer caravan, that was maybe half of what I could have used. (I have used many of those when the characters were trying to disrupt a supply caravan for the enemy army in the same campaign where they were attacking the Iron Keep from other threads.

The whole premise of that campaign was the player characters were kind of like a "GI Joe team as in the action movies - elite warriors with training and gear) that are sent on missions to take on much larger, but inferior to them, forces. To go where normal troops would not stand a chance. Since my players tend to enjoy more tactical situations than a lot of role-play stuff, this works for the game and lets me shift them from "movie to movie". With air ships (Eberron style) I can move them from the western front to the eastern front without having to have them slog 1000 miles across half the continent of Khorvaire.
Top

Yeah that makes sense Zenako. Thanks for sharing all this.
Rick, the Grumpy Gnome

The first elements arrived today (finally). Just the soothsayers hut and the smaller stone faces/heads and totems.
Wow, this hut is going to get a lot of use. I will be adding df-style felt to the bottoms of these smaller pieces. Just so used to DF resin having the thin felt, I really like having it there.

Will post some pictures once its cut and attached.

The ruins arrived today ..... these are simply amazing.

I can see instant integration with DF. The dungeon bases (small/large) has a bunch of flattish edges which will make them very usable with tiles, as well as negative terrain.
But the ruined wall pieces ... WOW! I don't know how these aren't getting more chatter ... Ruins and water tiles are always on my mind when building. These 6 sections (3 large and 3 small essentially) will combine very well with resin ruins.
There is a 'half-tower' piece that will fit perfectly by its looks on to the hole knoll.
I need to digest these a bit more but first impressions are a 9/10 for me. Including the dungeon bases.
The totems will serve not just as stand alone Ward-posts etc, but I think they can double as columns - even supporting larger floors above them (both resin and dwarvenite).

Will get some compatibility pictures going later.
Top

Yeah, the ruins are the most likely to get used, as they provide a very quick setup for what amounts to some significant scatter on a map. I am not sure about the 6 short wall segments. Those are in an unruined condition, but really share the esthetic of the ruined tiles. The next most used might be what I am calling the primitive structures with the thatched roofs. The large red tile-roofed structures will likely become a fixture in some village or city, perhaps one that is central to the plotline and would be used often (if the story indicates we need to set up a map of the urban location that is. I am glad I got a nice selection of each style. Pretty sure it was not a real conscious decision, more of a "what might I find a use for" selection in the PM back in 2018...
Top

I went heavy on upper roof and floor structures - just two hut/tower bases, and the two dungeons that came with ruins sets, for similar reasons. I was thinking more along the lines of halfling/dwarf abodes.
Top

pacarat wrote: ↑Sat May 08, 2021 3:16 pm I went heavy on upper roof and floor structures - just two hut/tower bases, and the two dungeons that came with ruins sets, for similar reasons. I was thinking more along the lines of halfling/dwarf abodes.

Will you show a photo of your project? It would be very interesting to see what you did.
Top

pacarat wrote: ↑Sat May 08, 2021 3:16 pm I went heavy on upper roof and floor structures - just two hut/tower bases, and the two dungeons that came with ruins sets, for similar reasons. I was thinking more along the lines of halfling/dwarf abodes.

Will you show a photo of your project? It would be very interesting to see what you did.


All unpainted and still in the boxes, but this is my order. Did the ruined dungeons as my pledge level.

After examining items my only changes would be to add a couple more hovels. (But those are simple sculpts, and easily done with balsa and either sculpy or teddy bear fur.) 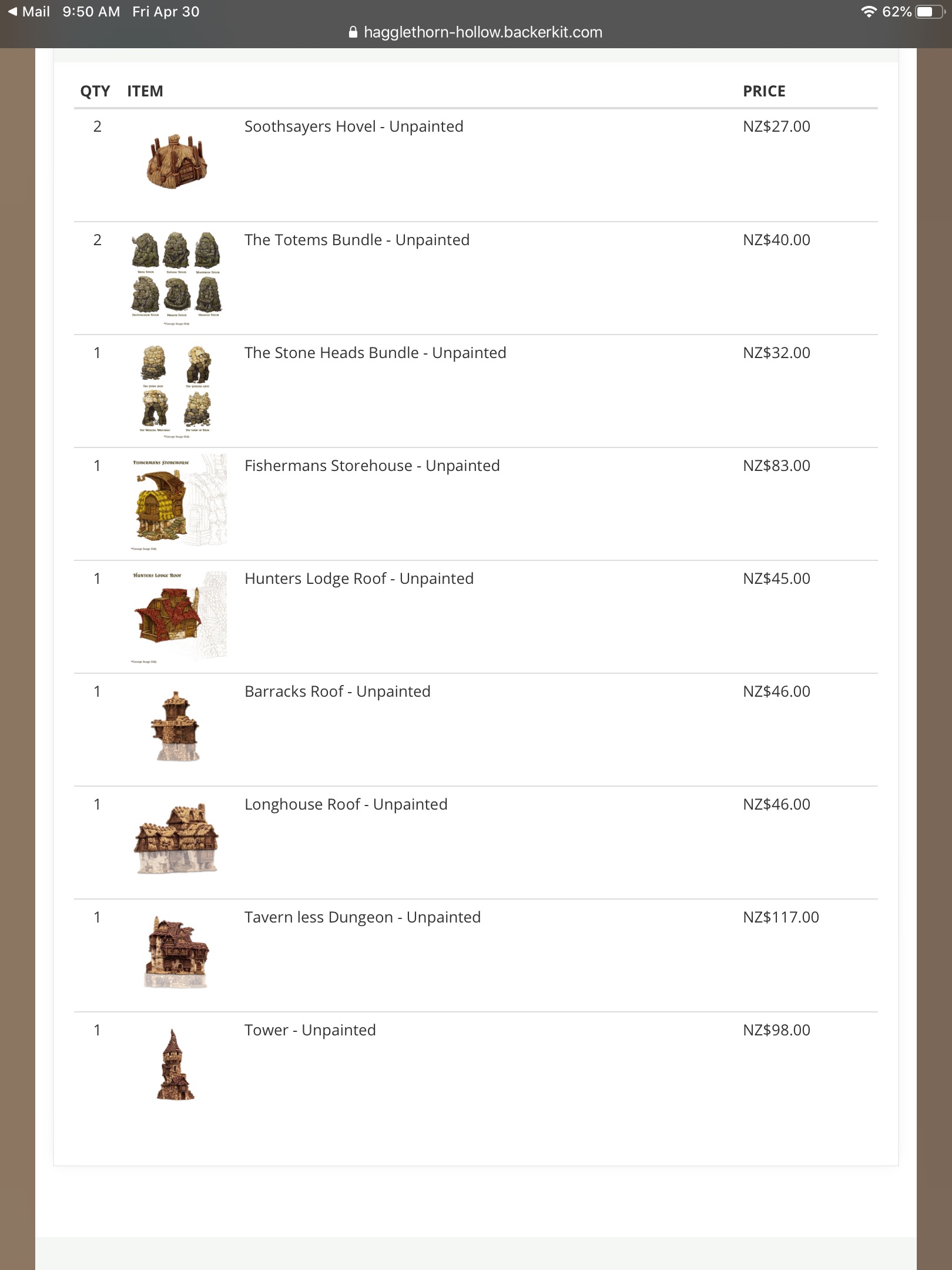 And a note to folks who bought unpainted- I did a soapy water and scrub wash the other day to remove any demolding residue. Sad to say I heard water sloshing around inside the fisherman’s upper piece. Seems there are scattered cracks and voids on interior bottom corners that allowed water “inside”. Also noticed some white residue on my green table cloth after laying it out to dry. Not good.
Top
Post Reply
313 posts