This is an area to discuss topics related to gaming.
Post Reply
37 posts

The latest update is, let's say, relevant to our interests! They're working to reduce the form factor to below 2", so that it can easily be concealed within a 2" tile's footprint.

This is pretty cool and I'm likely in.
Top

I would really like to know how long one pumps out steam and how much is the battery pack. I am just watching for the present.
Regards,

Cost vs. benefit for me is off, I'm saving my coin for DF.
100 Resin and 237 Dwarvenite Sets/Packs Owned
Top

The KS videos spent too much time on special effects and not enough on displaying how the actual product performs and works in a setting. I want to see how it looks in some specific setting, not as standalone cylinder pumping out steam/fog. How long does the steam persist and how far does it actually flow. How long does one pod last with one fill of water or battery charge? Also I found the shots they did have for their terrain pieces to not be that convincing to drop coin on. They look too steep for use in gaming effectively and their do not appear to be any suitable ledges to have minis perched on if someone was trying to climb into the damn volcano, and we all know that if the DM gives a party the option to try something like that, surely they will.
Top

The original Fog Monster was great for lingering fog, assuming you had an area to 'capture' the fog in: 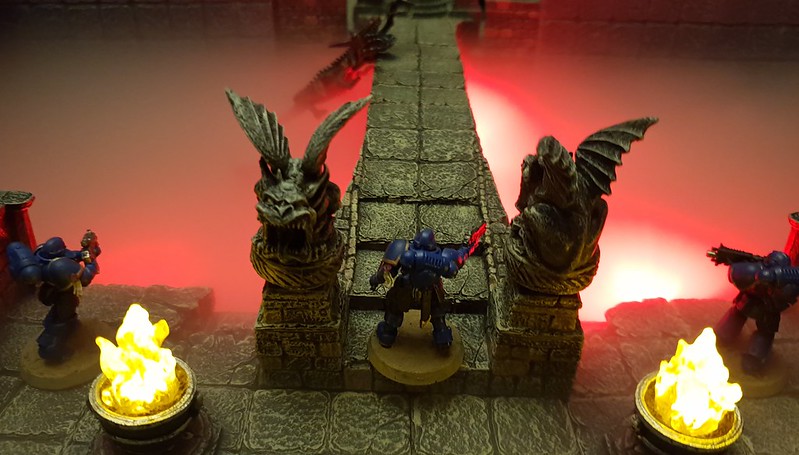 The battery powered pods will be great for more dynamic fog/steam/water effects such as Geysers and Volcanos as they show in various videos.

Its portability, size and lack of condensation we think will make them very usable, we fully intend to stick one in a spirit tree or two with a suitable tea light

Here is link to their You tube channel - maybe be more videos than on thei KS page:
https://www.youtube.com/channel/UCE14ZK ... C_hxvmAbmw
Mythrassian Lagomorph Hivemind Minion of the Flaming Bunny Clan
Top

I have two FogMonsters and I'm backing for a 4-pack of the steam pods. I don't use the FMs as often as I'd like since I have a table with a drop surface and the FMs definite build up condensation. I'm hoping the steam pods live up to their "no/little" condensation claim.

The FMs were a little under impressive for filling a build -- I could only get one encounter of a DoD space to fill with fog from an FM, which was a little disappointing, was hoping one FM could cover 2-3 encounters worth. I tried temperature experiments (raising/lowering the thermostat set point) to see if I could get the fog to stay around longer, but couldn't find a noticeable difference.

Several of my players have heavily flocked minis which they get worried about with the heavier condensation.

Definitely feel their more of display/diorama than game play at present.
Top

scott102303 wrote: ↑
Wed Apr 03, 2019 10:27 pm
I thought I would be in on this one, but the video in the kickstarter didn't impress me. The steam just seemed to blow out in a straight line, not billow along the surface. I know some of you loved the first fog machine produced by them, which seemed to produce a more atmospheric effect on the table - do you think the new one will be that evocative?

I agree - the kickstarter page / videos aren't blowing me away. But I'm still pretty excited for the steam pods themselves!

I think the steam pods are going for a very different effect than the fog monster. They'll be useful for a subtler fog covering, and if you want a dungeon full of fog, I imagine you'll need to set up multiple steam pods throughout it. They'll also be good for more effect-style uses, I'm thinking sewer builds and maybe some magic / trap effects. That's my plan, at least!

I like that they're cordless and way easier to hide in the scene. And the lack of condensation is a huge plus as well. That said, I also ordered a Fog Monster because that's also an effect I'd like to be able to bring to the table.

I'm also keeping an eye out for some video of those portals, because I feel like those could be pretty fun to include in a build. I'm picturing matching color portals used in some multi-room puzzles... May need a couple pairs of those and a multi-color one as well if they look cool in motion / against fog.
Top

I thought I would be in on this one, but the video in the kickstarter didn't impress me. The steam just seemed to blow out in a straight line, not billow along the surface. I know some of you loved the first fog machine produced by them, which seemed to produce a more atmospheric effect on the table - do you think the new one will be that evocative?
Top

Designed by a legendary game terrain maker to blend in with their existing modular tile terrain.

I know they use/reference DF a lot in their videos- did they partner with Stefan for this? If this geyser fits in with the KS6 pieces, I am most definitely in for it...

I'm excited for those too, but they're at such a high stretch goal level I'm afraid we're not going to reach it!
Top
Post Reply
37 posts