Aye, what an experience. My wife and I want to capture the immersion of Skyrim on our table. It is not an easy task.
Rick, the Grumpy Gnome

Floating rocks and alien flora and now the link is made!

We saw Avatar again a few years ago before we did the whole Florida Disney World thing in 2019, the ride is amazing assuming half of it does not break down and turn the queue into a day long event!

The ride is worth it mind

But the whole Pandora environment they created is amazing and that's what Wildlands allows you to do, floating rocks and lush alien flora.

So we would like DF to do a Sci-Fi Tech environment, Space Ship interiors or Planetary Fortress interior. With LED and magnet options, with separate packs for pure Terrain, Tech Terrain and Bling

We did the Disney Pandora trip last year before everything shut down. We missed the big Flight of Passage ride, because that's one of those "center your whole day on your strategy for getting on this ride," either because you wait three hours (no joke, that's not even a particularly long wait for that ride) or because you just arrange to get there first thing and go straight to the ride at park open.

And honestly, going to theme parks, I'm prepared to be that OCD about it, but we only had one slot for that kind of attention, and it went to Rise of Resistance over at Galaxy's Edge. We were Boarding Group 2 and it was awesome. Can't wait to go back!
Top

Was going to comment on the Disney trip, but thought I wouldn't go off topic because I do that too often. But then Law did, so... it's not tooo long. Plus there's some good advise at end.

Last time I went to an amusement park was Magic Mountain out in the hills of Los Angeles in 1985. While in the park we noticed signs for a deal after hours and looked into it. This was 36 years ago and deals like this were not known by all (no internet), maybe locals knew. It had been a long day of driving there and then playing most of the day at the park and we knew there was 2.5 hours of driving after we left the park. But half way through the day of walking and riding we decided to pay for the special pass to ride the coasters after hours. The park was empty except for three groups of twenty or so that were spread out on different coasters and we rode them all, twice. Even though we all were completely spent, it revived us and was a blast. That was the best $45.00 I ever spent in my life.

Also glad we made it home that night. I only happened to drive blind (fell asleep) by brail (edge rumble) once on way to hometown and it scared the living begeezes out of me, so I was wide awake for the last half hour.

I used to love riding them back then, but within a year I broke my vertebrae which ended coaster riding for me forever.
Warning to the young, take care of your back and bones. Old minor nuisances can become major problems when you get older. Mine wasn't minor, but I know so many people with back problems that didn't crack-a-back when they were younger.

Back to your regularly scheduled Sci-Fi Dwarvenite conversation...

Back when my daughter was little, one of her favorite games was Roller Coaster Tycoon, and that also meant whenever we went to theme parks or amusement parks we tended to hit all the coasters. We would also show up when the gates opened in the morning and only leave when they were kicking folks out like 15 hours later. Some of our relatives on those trips would burn out after half that time.

So before we showed up, we would often make plans to hit the most popular ones right away and made sure to blow past any of the ones near the main entrance gate to at least the middle of the park and work towards the back. We also found that late at night some coasters especially those near the back of the park, have almost no line. We could ride it, get off and then sometimes get back on the same set of cars if the line or maze was short enough. We could then try sitting in the front car, the middle or the back and see how those shifts changed the ride experience. Would also talk about the physics of the ride with my daughter (maybe part of why she is a Mech Engineer now).

As to SciFi, I note the most recent Tiny Furniture offering has a bunch of SciFi themed items. Nicely done as usual, just not for me.
Top

I went to the Florida theme parks the Monday after Thanksgiving a few years ago and they were deserted. I found out that is their least busy day. It was a great experience.
Regards,

When at Disney - always pick the most obnoxious line for lunch - then reach in the backpack in line and keep the kids busy by slowly doling out sandwiches, fruit, carrot sticks... suddenly an hour plus has gone by and you are much closer to the front

Always hit the LOG ride at close - it is cold - no one wants to be wet - run around as many times as you can (6, 7, 8... ) until they kick you out - then get in the car completely soaked and shivering - it was my favorite trick when i was young and my kids think it is a hoot - i think the especially like running through all the switchbacks to get back the the boarding area - silly, but that's what memories are made of!
"Miniatures?, sure sign of a petty mind!" - 'The Women' 1939
Top

A few years back we had an extended family visit to Disney World between Christmas and New years. The parks are not as crowded and the abnormally cold temperatures for Florida at that time kept down the locals I suspect. Since all of our party was from New England and Minnesota which were in the middle of Blizzards that week (started literally just as we left Boston - we were one of the last flights out...that was nerve-wracking). The park was pretty open and the Log Flume ride was sparsely attended. By late night it was in the low 40's if not 30's the day we were there. (But compared to the 12 degrees with massive snow back home, it was fine.) For some reason, folks did not want to do the flume too many times and have to chip the frost out of the beards and hair as the spray hung in the air.

So going at off-hours or off-peak days gets you a lot more access to rides especially.
Top

Planning to be in DisneyWorld first week of Mar 2022 before getting on a ship. Trip delayed by two years.
Top

In the spirit of derailing due to rollercoasters, DISNEY NEEDS TO OPEN A PARK IN THE MIDDLE OF THE US TO REDUCE TRAVEL DISTANCE AND CROWDING AT THEIR OTHER PARKS.

Oh, and I grew up next to an amusement park (Lagoon) that has this coaster: 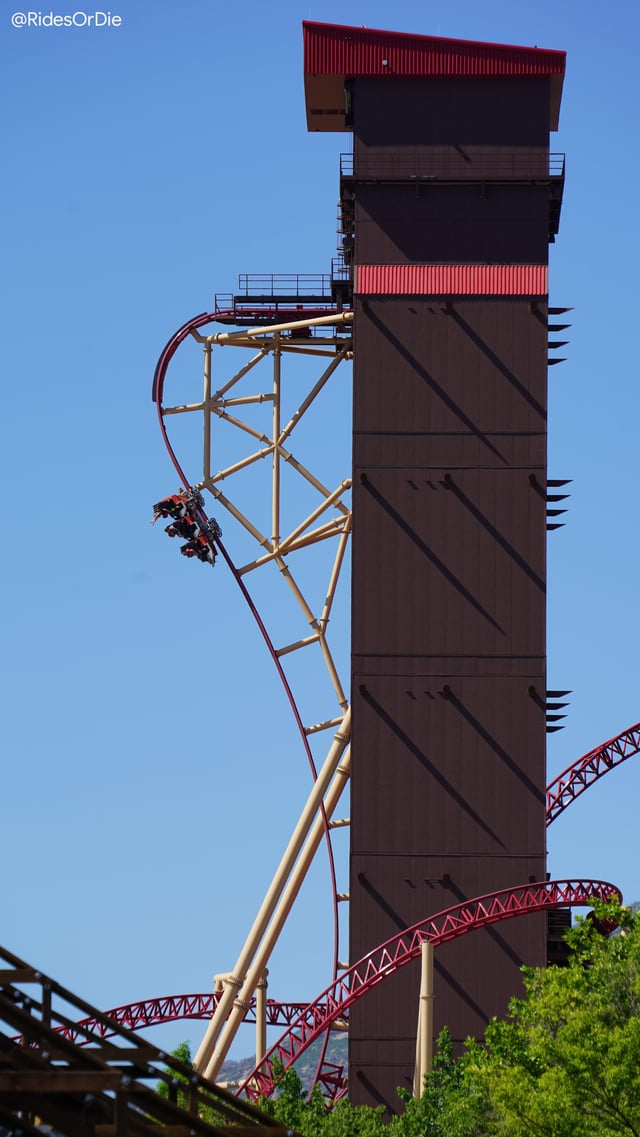