This is an area to discuss topics related to gaming.
Post Reply
111 posts

The Blackburn docks in use. I also have the MBA and GW Lake Town dock sets. The MBA Resin Has suffered some damage over the years. Hot weather has cause some of the Blackburn docks to warp like the Dwarvenite tiles often do. However, It was an easy fix. If I had stored the MBA docks in the original box they would have been in better shape.They did survive 6 house moves and countless conventions. Store your Blackburn docks flat.

I mentioned that I like the Adventurescape doors. I will add the kitchen set to my resin collection.
OldmanWillow AKA OldEnt. Customer and fan from 1996 onward!
Top

FWIW, I bought the mimics set and a few other bits from ForgePrints just recently. The detail is really crisp and the mimics are all so inventive, I love them. They're of course not as sturdy as dwarvenite pieces, but I've dropped several and nothing has broken either in shipping or here. I will say some of them are a little fiddly to glue together, and there is some annoying mold release residue in some spots (especially on the skull piles). Also the "RIP" font on the non-mimic tombstone is deeply wrong, it's Arial or something.

But the quality is solid and they feel like a reliable company. They shipped super fast.

Obviously if DF preferred for them not to post here I would understand, but FWIW, it doesn't really feel to me like competition for DF. I imagine that a resin collector might be happy to add the tavern and alchemy room resin sets to their DF resin sets for more variety, but it wouldn't make you NOT want DF sets. And if you're a Dwarvenite collector who likes to throw their pieces into a bin, then you don't want the resin walls and floors at all. I'm currently tentatively in for a docks set and hoping they do accessories-only packs for the other two.

I also second @jchunick's rec for Amber's Secret Cove on Etsy -- I have their 3D printed cage and a couple of resin rowboats, and they are both very nice & they are also fast shippers and reliable. I like the 2x2 footprint of the Adventurescapes docks and their crane/accessories, but the ASC docks do look beautifully organic.
Top

jchunick wrote: ↑
Wed Sep 06, 2017 10:53 pm
If we're talking about docks (as a fair subject) then I can only comment on and recommend Jolly Blackburn's docks and the like, some of which I own, and which you can find at their Etsy store, Amber's Secret Cove:

I like the look of that a lot! Had no idea it existed - thanks for posting the link Josh! I have concerns about the Adventurescapes docks and all the pilings being separate. These Jolly Blackburn ones look like the pilings support the docks, so will be more stable/secure.
Top

Just to clarify dice4hire's post, the Etsy page is USA-only. ForgePrint's KS will ship internationally. I think the Etsy models and Adventurescapes terrain would work well with each other. The Etsy pieces are 21 pieces for $55.
Top

Yeah, I guess that'd be a problem for you, eh?

...and you? I'm assuming you took a drive to pick them up?

Yeah, I guess that'd be a problem for you, eh?

Only ships in USA

If we're talking about docks (as a fair subject) then I can only comment on and recommend Jolly Blackburn's docks and the like, some of which I own, and which you can find at their Etsy store, Amber's Secret Cove:

Does anyone have some pictures they can share to show us the quality of the painted pieces? I am not talking about how well the pieces are made, just interested to see the paint job and how it matches up to what was advertised on the KS. I am already on board for the painted docks but there is talk of possibly having accessory add-on packs (like the kitchen stuff) so I'd like to see what smaller items were painted like in the mimic KS to know if I should go unpainted or painted for add-ons this time round.
Top

I'm fine if all we do is talk about the docks. (: Reaper has a KS forum with an AdventureScapes thread.

Anyway, the docks come with a 4x4 water gaming mat. Doesn't look like neoprene, but I'm not expecting the expensive material for the low EB price. You can use the gaming mat with DF cavern and other tiles to make lakes and whatnot, if you don't have enough cavern water tiles. Here's a pic of the cavern edge pieces you can imagine with a cavern stream or river. This blog page has examples of using game tiles with a water mat. 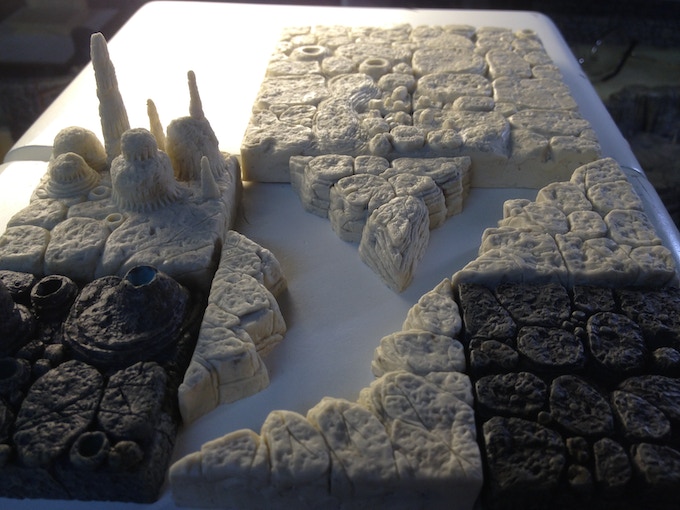